– The Bufo Toad, a veterinary tale
In the pre-dawn hours one day last month, Judy and Tom Doty learned a heartrending lesson about the realities of living in the nation’s number-one state for non-native species.

Tom had gone to the fitness center early, while his wife, Judy, let their new basset puppy, Sadie, and Hannah, a Jack Russell terrier, out for their morning romp. 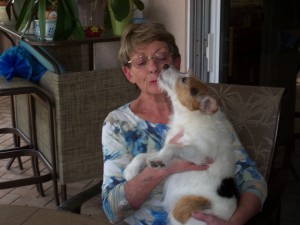 Jack Russells are great hunters, according to Judy, who says they’ll go after snakes, groundhogs, chipmunks or just about anything, not intending to kill, but for the sheer joy of catching prey. It wasn’t long, though, before some peculiar noises prompted Judy to check on the dogs. That’s when she discovered Hannah had acted on her hunter’s instinct by attacking an intruder – a potentially deadly Bufo toad.

“It was so horrible, I really don’t want to remember it,” recalls Judy. “I brought her inside. She started convulsing right away and went rigid. It was obvious she’d been poisoned, but I really didn’t know what to do.”

Soon, Hannah was in the throes of neurological episode that could have dire effects on her cardiovascular system: She had trouble breathing, was disoriented, her eyes glazed over and her head shook; clearly, she was in distress.

“She didn’t know where she was at first,” continues Judy, a nurse. “Her beautiful, deep-brown eyes turned gray. I was afraid to put her down, because she was so wobbly. I didn’t want to flush her mouth for fear of washing the poison down her throat. All I could do was hold her, pet her and talk to her.

“I tried to expand her chest to ease her breathing, but I really thought she was dying; I thought I was losing her right there in my arms.”

By the time Tom arrived to hustle their ailing pet to Big Cypress Animal Clinic, Hannah, who turns 12 in December, was hyperventilating and breathing in shallow gasps; by then she could barely stand.


Hannah stayed at the clinic all day while the Dotys fretted they might not see their little terrier again. The staff at the clinic kept a close watch over her, as they administered IV fluids and drugs to calm the nervous system; by closing time, Hannah was nearly herself again.

Hannah now suffers daily muscle tremors and shaking, but Tom says she seems to have learned a lesson, much to his relief.  “While Sadie just barks at them, Hannah stays clear of the toads now; she knows to go the other way.”

Meanwhile, Tom has set about dispatching as many of the warty amphibians as he can; a daunting task, given the heavy landscaping in his backyard. Still, he’s captured half a dozen of the critters and says their size can be impressive. “They are huge. Some are sic or eight inches across. It’s shocking, they’re so big,” who himself checks in at around six feet.

“I had never heard of these toads,” says Judy. “We chose this house, because the yard is fenced in and we could just open the door and let the dogs run. I guess our dogs won’t be going outside after dark anymore.”